MichaelJames Magic
Rough voice, but draws you in

I wasn't going to do a post for him as he slipped in and started playing after Maxx Sabretooth finished at Under the Willows. I had him, MichaelJames, on in the background as I finished up Sabretooth's post. His music impressed me, his talking voice impressed me, then he started singing and I figured, ah, well I won't do a post for him. He continued in background, I continued wrapping up prior post and . . . . MichaelJames started growing on me. And so . . a post for him. hehe. I sometimes think the random ones end up having more said. heh. maybe. 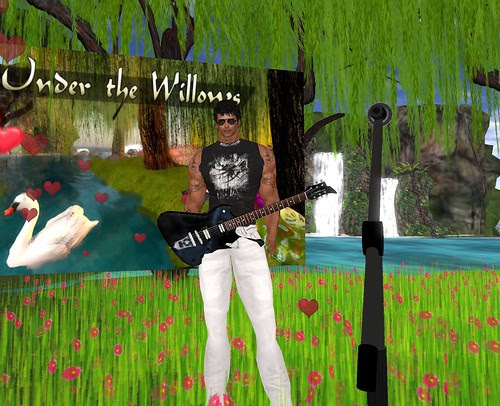 sim: 20 avatars; venue: Under the Willow

Songs: Well, as I mentioned above, I had him on in the background as I worked on other things. Good songs, good music. Voice was somewhat rough, but it grew on me. All, I remember now, first song was by Neil Diamond. I didn't notice until I looked at the guy's profile, but he was voted SL Country Artist of 2010. Well, what I had not noticed was that I was listening to country music. hehe. Course, now this current song is strongly country. saw half of his show.

Other than seeing certain things in profile, like the country thing, I do not have a lot to put in the other slots. No board to click on to get song list, bio. No schedule linked in profile. I see he is into breedable horses.