Ganjo Mokeev was recommended on a GV thread. So I went to his show. To find Vincent Merricks. So . . . I started this blog entry from a distance and didn't realize I had the wrong singer until I went for the close up photograph. So . . . Merricks gets blog entry. heh. 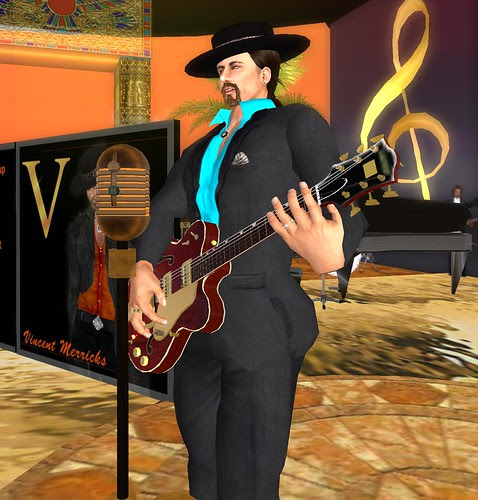 Songs: Arrived near start of set (I thought, then realized Merricks was covering for Mokeev, and was actually extending set). First song that "Honky Tonk Badonkadonk" one by Trace Adkins. "Dream Lover" or something like that second song. Third song one from the 1950s. Or would have been, if he could remember the lyrics. A lot of starting and stopping during songs (forgot words, etc.). Considering Merricks was filling in, I give pass for that. hehe. His voice has some interesting hooks, but also gets overwhelmed, lost . . . a little soft compared to the rest of the music. Fourth song was a Josh Turner one. Fifth song BB King tune (blues), "Thrill is gone". I have to say that you need to give him time and he can grow on you. Making up mind after one or two songs can be deceptive. As in he is deceptively better than initial impression. heh

Vincent Merricks is a good guitar player. hehe, then there was "tuning song", as he referred to the time he tuned guitar. hehe Then "money for nothing, chicks for free". Switch genre to "Unforgettable". hehe "wrong verse" hehe. Ok, that is entertaining. "mix up the other way".

His voice is somewhat deceptive, somewhat weak sounding, but it can grow on you if you give him a chance.

Ok, I admit that every time in the past that I've caught Merricks, it was before or after some other singer I had gone to see. He was playing before that other singer's set, or after. So I never really gave him much of a chance. I'd listen to a bit of his act, then wander off to another singer, or stop listening to music for the night. I realize now that he is a lot more entertaining than I had thought.

hmm, he does a good Simon & Garfunkel song. Voice seems perfect for it.

Did a Dierks Bently song near the end that kind of shows something of the voice issue. Started off somewhat weakly, but as the song continued, the voice really started to work with the song, and gathered strength.

Then again . . . I did arrive for hour two of his show. And he noted at the end that he rarely has done that in SL. So . . . . my ratings reflect how he sounds in hour two. hehe